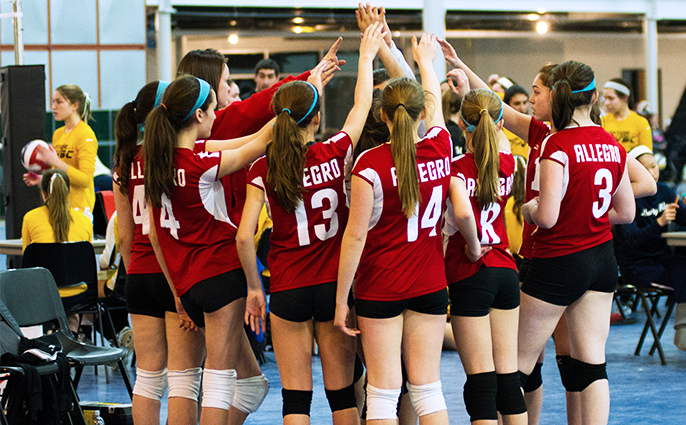 Winning feels good. The feeling of conquering and overcoming an obstacle gives people (especially competitive people) a rush of adrenaline. The sensation fuels us to do our best and work hard, and in its best form is a motivator to meet goals.

At its worst, winning becomes the only goal. In the cloud of competition, parents rage against coaches, coaches pull out their players, and players fight with teammates about who caused the loss. When winning is the focus, people often stop trying for fear of losing and failing at the goal.

Last year Sarah, a shy thirteen-year-old, made a goal to serve a volleyball overhand. Although she was nervous, she decided to join the middle school volleyball team because she really wanted to be as good as her older brother. After pre-season, she still had not mastered the serve, and was afraid for her first real game.

At Spooky Nook Sports, Baseball Director Troy Steffy works with kids as they learn and improve in the sport of baseball. He is a professional in teaching the skills, body movements, and workouts necessary to compete at a high level and win games. However, Troy often shares with parents that he wants to win but not at the expense of his players.

Poor coaching can have devastating affects on players like Sarah, who are in need of a confidence boost and whose goal is simply to improve. Bad coaching can ruin self-esteem, cause injury if the coach does not stress technique, and ultimately turn a player away from the sport.

On the night of Sarah’s first game, as she stepped up to serve, she looked at her coach with apprehension. She thought, “He knows I can’t do this yet. He’s going to pull me out.” The coach looked back and gave her a thumbs-up. Sarah tossed, swung, and watched as the ball hit the net and dropped to the floor. But before she could break into tears, she heard her coach calling, “Nice effort, Sarah! It’s alright. Get ready to pass!”

“A good coach should know what motivates their players,” explained Coach Steffy, “because winning means more to a person than only winning games. If a player’s goal at age 10 is to play high school volleyball, winning or losing a game will not prevent her from meeting her goal. At that age a win is seeing improvement.”

Good coaching teaches players to work as a team, set goals, and have confidence in their abilities. Just like the best teachers, excellent coaches go beyond teaching lessons to teaching life skills. “When a coach teaches development, and uses winning as a motivator but not a goal,” says Coach Steffy, “wins follow as a result.”

If Sarah’s coach had pulled her out of the game when it was time for her to serve, it would have made her feel that her coach did not believe in her, and in turn she would have had a difficult time believing in herself. Instead her coach put the importance on his players’ self-esteem instead of winning the game.

Both school and club teams see their fair share of losses and failures. Whether it’s the coach, a player, or even a playing surface, it is easy to find something to blame. Some may argue that when families dedicate their time and invest in club teams to see their children succeed, wins should come as part of the package.

In a culture of instant success and gratification, little emphasis is placed on the process and hard work needed to earn a winning record. No parent wants to see their child fail, but with every failure comes a lesson learned and an opportunity for improvement. In Coach Steffy’s words, “Failure is viewed as a negative but it shouldn’t be. Instead people should see it as an experience that will help them grow.”

At The Nook, coaches believe that the value of playing a sport is seen in more than wins. In a quality club program, families should see experienced coaching, increased physical ability, advanced teamwork skills, and improved self-esteem. Superior playing surfaces and extra safety measures add to a positive experience.

Coach Steffy says there are three reasons you are unable to accomplish something: you were never taught, you have a physical limitation, or you are telling yourself you can’t. When Sarah’s coach gave her the confidence to keep trying, it changed the way she felt about herself and her ability to accomplish her goal. In the end, she did learn to serve overhand, and is now looking forward to trying out for her high school team.