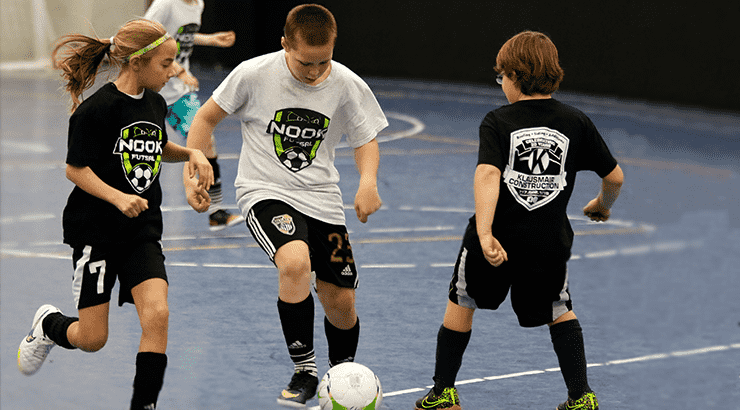 Fact #1 - All of the world's greatest players grew up playing futsal and recognize the game as a major reason for their foot skills and ability to think quickly under pressure. Pele, Maradona, Messi, Kaka, Xavi, Ronaldo, Robinho, Ronaldinho, and Fabregas are just some of the players that grew up playing futsal.

Fact #2 - All of the top clubs in the world (Barcelona, Real Madrid, Chelsea, Manchester United, etc.) have their youth players playing futsal! In fact, most junior players in Brazil don't play outdoor soccer until around age 13. Instead, they play futsal!

Fact #3 - In a recent study it was observed that futsal players touch the ball 210% more during games than players playing traditional US indoor arena soccer.

Fact #5 - With no wall to help them out, players must move and support each other just like in outdoor soccer. This develops more tactically aware players, whose skills can be transferred to the outdoor game. With the absence of walls players must also perform skills properly and accurately, while poor technique and inaccurate passes are punished.

Join in on the fun. Sign up for soccer and futsal programs!