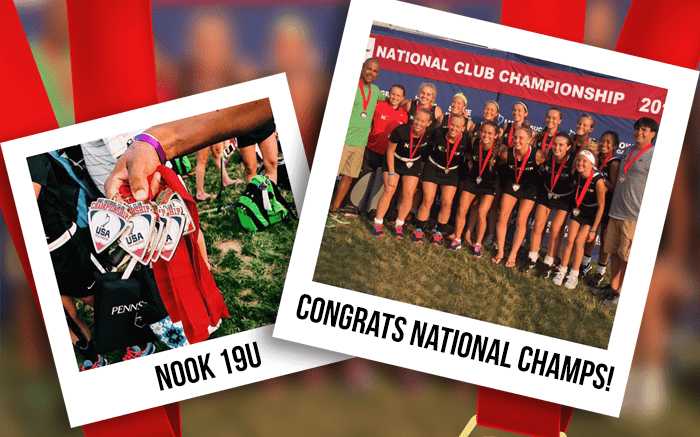 After winning the NCC Semifinal in a shootout, the Nook U-19 team was ready for the final game. The game was played between Nook Hockey and New Heights, from Essex Fells, NJ. It was a hot day and the atmosphere had become subdued after a long day of competition. With the first whistle of the finals, however, the excitement picked up with each passing moment.

“Before that game started, I just told them to trust the system, rely on your teammates, and play as hard as you can,” said head coach Matthew Soto. “And I told them to enjoy the experience of playing for a national championship. I mean, how often do you get to do that?”

Nook Hockey scored two quick goals at the beginning of the game and the excitement over the possibility of winning was unshakable from the players throughout the duration. After an intense 60 minutes of gameplay, the Nook U-19 team came out on top with a score of 5-0.

Since the formation of the Nook Field Hockey Club four years ago, this is the first time that a Nook Hockey team of any age group has won the National Club Championship.

“Nook Hockey is definitely special,” said Soto. “It’s a great group of athletes who really understand teamwork, a fantastic staff, and top of the line, facilities. You put all that together in a region that’s a hotbed for hockey and it’s a recipe for success.”

Spooky Nook Sports is also called the Home of Hockey, as it houses the US Women’s National Field Hockey team.

With the National Club Championship being the culmination of the club hockey season, what comes next for Nook Hockey? Well, there’s not much rest in Nook Nation. Tryouts for those interested in competing on the club teams next season will begin in August and occur once per month through October.

Congratulations to all the helped propel the team to victory, including coaches Matthew Soto and Chelton Hunter, Team Rep Suzann Hobart, and all 24 players.

How do I become part of Nook Hockey? Click here for more information.